Continue to rise! On July 15th and August 1st, ocean shipping prices ushered in another two rounds of jumps! GRI has risen 15 times this year! 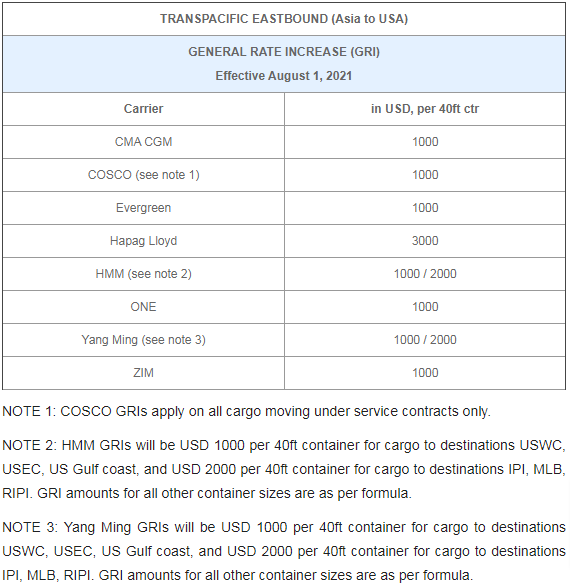 According to data from Sea-Intelligence, due to global port congestion and insufficient capacity, the number of container ships calling at ports with delays of more than two weeks in 2021 exceeds the sum of the past nine years.

The shipping company makes a net profit of US$1,000 per box shipped.

On the basis of the first quarter financial reports released by major shipping companies, Sea-Intelligence has derived their single-container profit based on the ratio of net profit before interest and tax (EBIT), operating profit and freight volume.

It is also worth mentioning that shipping companies such as COSCO , CMA CGM, Evergreen , Yangming and ZIM etc will have more profits in the first quarter of 2021 than in the whole of 2020.

As the shipping market is expected to be very good, in order to meet market demand, HMM, WANHAI and SEASPAN have recently announced their latest shipbuilding plans.

According to the announcement, SEASPAN signed an order contract for 6 15000TEU ships with a large shipyard with an undisclosed name. It has signed 17 container ship leases with COSCO.